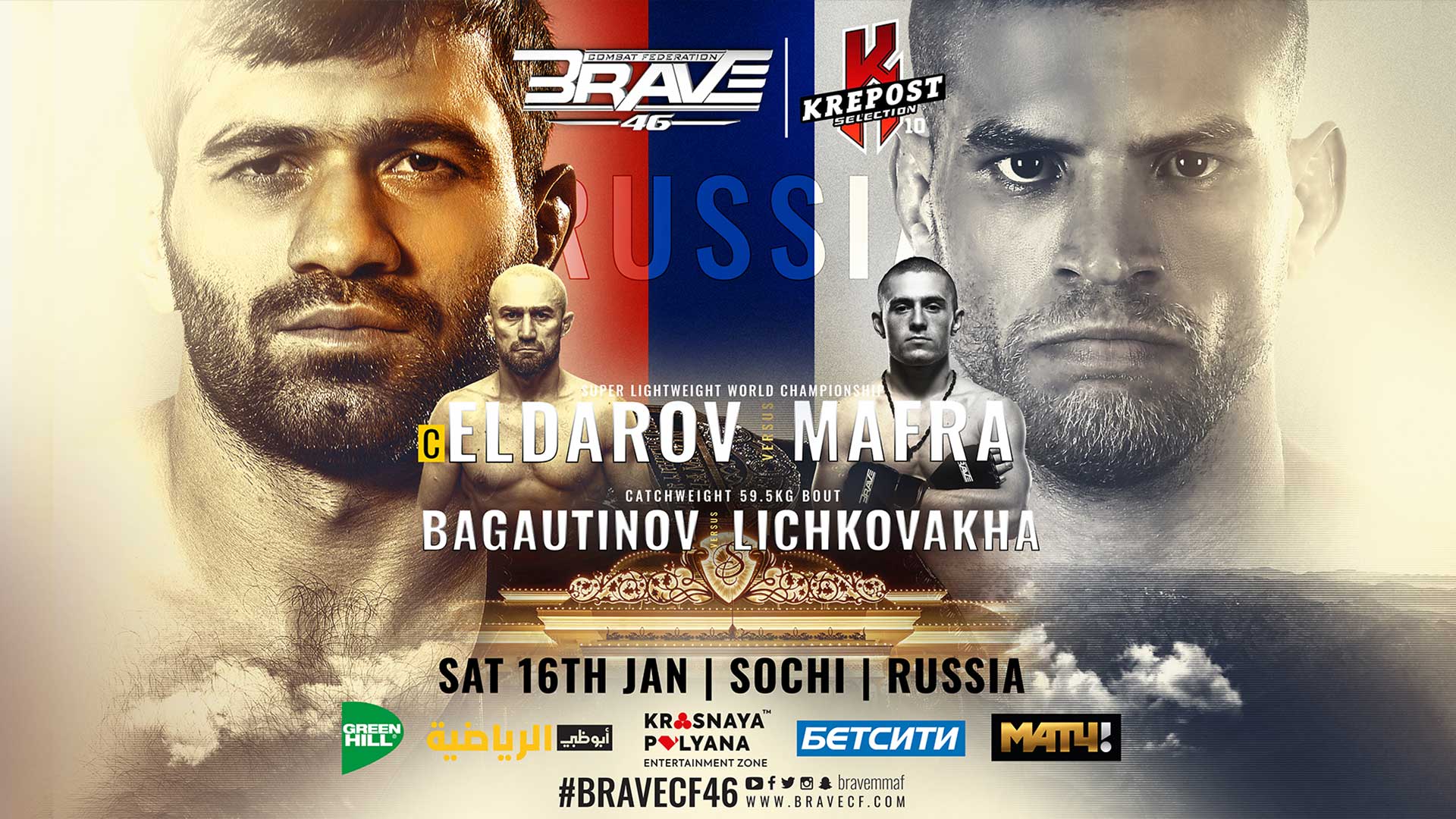 An emotional Eldar Eldarov walked out during BRAVE CF 46 main event. The Super Lightweight champion of the world had many reasons to do so, that was his first fight in almost two years, the first fight for him under the BRAVE CF banner in the country in which he was born, and he was paying homage to the late Abdulmanap Nurmagomedov, one of his mentors and closest friends.

Despite having so much at stake, Eldarov did not seem to have felt the pressure and looked as sharp and deadly as always, giving little to no chance for his challenger, Brazil’s Leonardo Mafra. After the very first round, Mafra was declared unable to proceed by the medical team and Eldar retained his title.

Interestingly enough, Eldar Eldarov started the fight taking the lead in striking and dropping combinations, which threw Mafra off. But the Brazilian quickly welcomed the chance to keep the fight standing up and started to stalk the champion inside the cage.

What everyone expected to happen came with only 15 seconds left on the clock. Eldarov got his first takedown and, while Mafra tried to get back on his feet, caught him with a brutal sequence, which opened a huge cut in Mafra’s eyebrow.

The one minute break wasn’t enough to evaluate Mafra’s situation and as the time kept passing, the tension started to build. After a few minutes, though, the referee heard from the doctor, Mafra couldn’t keep going, he let Eldarov and his team know and the champion exploded.

After the win, Eldarov showed great sportsmanship and praised his opponent Leonardo Mafra. He also thanked His Highness Sheikh Khaled and celebrated the memory of Mr. Nurmagomedov.

“Leonardo, my friend, great respect! I’d also like to thank Sheikh Khaled bin Hamad Al Khalifa, the man who has stood behind all of this, the man who made all of this possible! I promise, in 2021 we will have many more champions coming from KHK MMA team. Finally, I’d like to pay my respect to the late Abdulmanap Nurmagomedov who left us so early”, the champ said.

Eldar Eldarov is now 13-1 in his professional career and is still undefeated in BRAVE Combat Federation, winning five out of five fights under the fastest growing MMA promotion’s banner.

In the co-main event, Ali Bagautinov made an impressive BRAVE CF debut by defeating Oleg Lichkovakha. The fight was a one sided affair with Bagautinov dominating using his wrestling and ground and pound. Despite the dominance, the fight went the distance and Bagautinov was declared the winner by the judges.

The event also saw the triumphant return of “The Russian Bear” Konstantin Erokhin, after a 3-year absense with a huge knockout over Zhyrgalbek Chomonov, who entered this bout undefeated in his professional career.

Erokhin looked to control the actions since the beginning of the first round but was caught off guard by a head kick that dropped him. He got back on his feet and recomposed, though, and entering the second round came for the win, landing a beautiful combination straight to Chomonov’s face, which broke his nose, made the Kyrgyz fall flat, and forced the referee to stop the fight.

Another BRAVE CF newcomer, Roman Bogatov, took full advantage of his experience and beat Kazakhstan’s Nurzhan Akishev via unanimous decision. After a first round of back-and-forth action, Bogatov took the lead and used his grappling to secure his first BRAVE CF win.