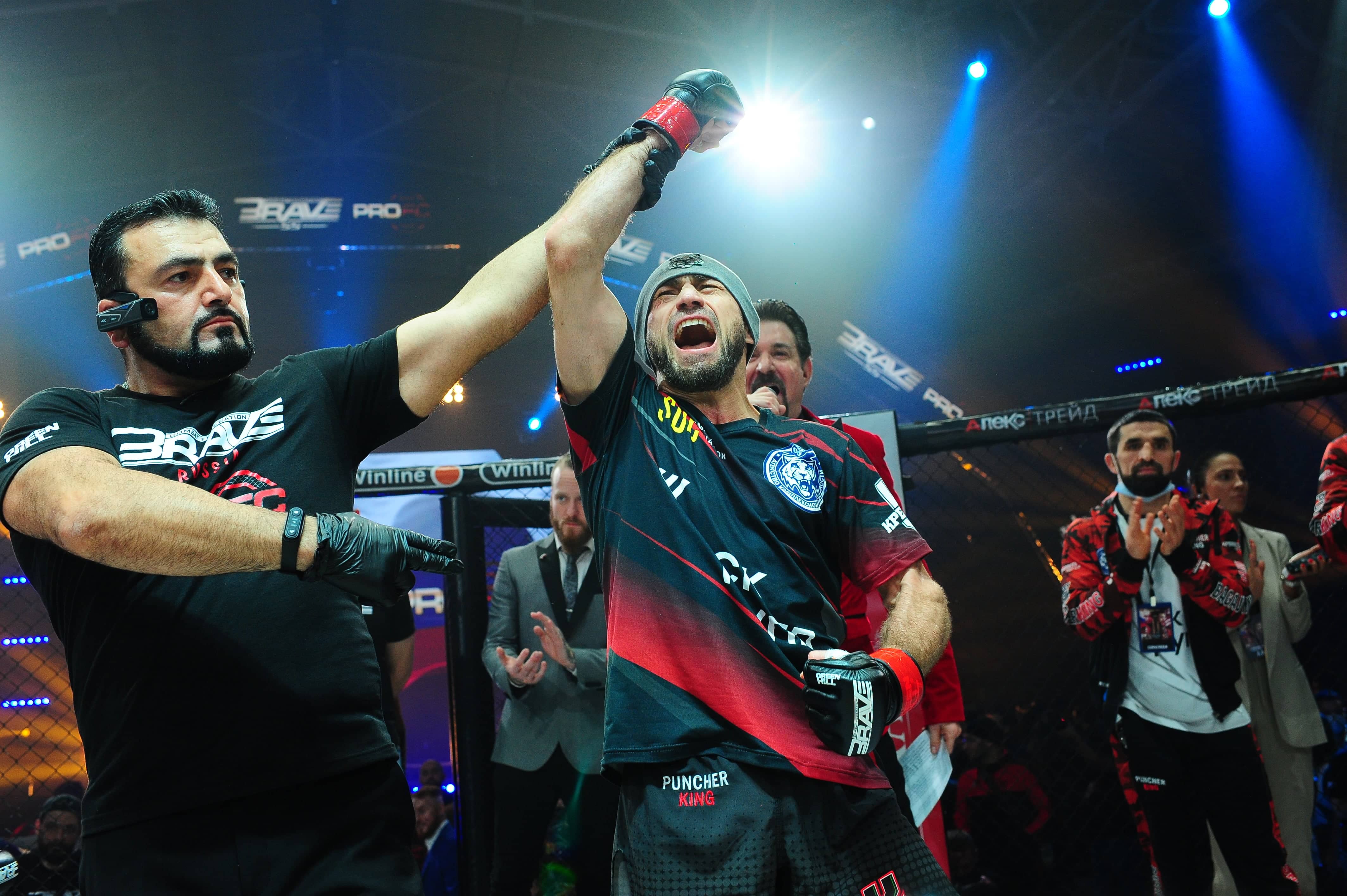 BRAVE Combat Federation wrapped up its calendar for 2021 with an epic night of fights in Rostov-on-Don, Russia, the same country that kicked off the promotion’s year back in January. BRAVE CF 55 saw the rise of contenders and a plethora of exciting fights and finishes. In the main event of the evening, Ali Bagautinov showed why he’s known as the “Puncherking” and stopped Sean Santella in roughly a minute using his fists and qualifying to meet Velimurad Alkhasov in the Flyweight Tournament Grand Finale - the winner will become BRAVE CF’s first-ever 125-pound world champion.

Right off the bat, Santella, a skilled grappler and seasoned veteran, went straight shooting for a takedown, which Bagautinov promptly denied while connecting his first hands to the opponent. “Shorty Rock” insisted and Bagautinov managed to gain the top position, unloading a deadly sequence in the ground and pound that forced the referee to stop the fight. Afterwards, the American grappler complained of a shot to the back of the head, which the referee didn’t see.

Bagautinov dedicated the fight to his uncle who passed away and had a simple but exciting message to Velimurad.

‘’Velimurad, we have known each other for many years, and I’m happy to be fighting you. Now is our time, let’s show who is the best’’.

England’s Sam Patterson also inched closer to a title shot after surprising Kamil Magomedov and beating the seasoned grappler by submission in the second round, extending his undefeated streak to seven fights. Patterson showed slick grappling skills by sweeping the opponent and locking a tight guillotine in the second round after a first frame dominated by the Russian.

“The Future” was calm enough to take his own time adjusting the position until the inevitable tap. Being in the best form of his career and having unfinished business with the reigning champion Ahmed “The Butcher” Amir, it wouldn’t be a surprise if Patterson became the next challenger in the Lightweight division.

The co-main event of the evening of BRAVE CF 55 was the event's fair share of uniqueness, with a rare unanimous draw (a triple 29-29) in the bout between Ibrahim Mane and Artur Sviridov.

After a busy first round, the two athletes slowed down a bit throughout the remaining 10 minutes, which left the referees unable to give each of them the edge. Mane felt he had done enough to get the nod and complained in his post-fight interview.


Check out below all BRAVE CF 55 results:

Welterweight: Sergey Yaskovec def. Andrey Bragovskiy via TKO (punches) at 4:53 of Round 2

Super Welterweight: Kamal Magomedov def. Vitaly Tverdokhlebov via submission (armbar) at 0:52 of Round 1

Bantamweight: Vadim Pavlikov def. Alan Balaev via submission (rear-naked choke) at 3:56 of Round 3